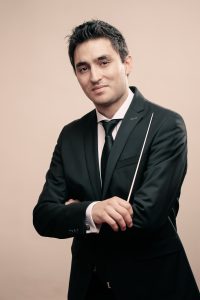 Praised for his deeply felt musicianship and inspiring temperament, Helmuth Reichel Silva is rapidly emerging as one of the most interesting and versatile young conductors of South America. He first came to international attention in 2015 as a finalist at the prestigious Besançon Conducting Competition, subsequently receiving invitations to conduct
orchestras in Europe, South America and Asia. Reichel Silva is the winner of the Art Critics Circle of Chile Award for the best performance of the year with the Orquesta Sinfónica Nacional de Chile. Other prizes and accolades include the 2nd Prize at the 6th German Conducting Competition in Stuttgart and the Orchestra Prize at the Jeunesses Musicales Conducting Competition.

Helmuth Reichel Silva enjoys a highly acclaimed relationship with the Orquesta Sinfónica Nacional de Chile. Following his debut concert with the orchestra in June 2016, he was immediately invited to return as Conductor in Residence at the orchestra’s 2017 Summer Concert Series, featuring his debut at one of the most important festivals of South America, the “Semanas Musicales de Frutillar” at the Teatro del Lago, conducting performances of Beethoven Symphony No 9 and Tchaikovsky Symphony No 5. More recently, Reichel Silva was invited to open the Season 2019 with Stravinsky Le Sacre du Printemps and Bartok Concerto
for Orchestra.

Committed to the support and development of young musicians, Reichel Silva has served as coach and conductor of the Junge Deutsche Philharmonie since 2015 and has assisted conductors such as Dennis Russell Davies and Ingo Metzmacher.

Helmuth Reichel Silva is devoted to new and 20th century music by Latin American composers, recording CDs featuring the chilean composer Esteban Correa with the Orquesta Sinfónica de La Serena. Alongside works by composers such as Ginastera, Villa-Lobos and Revueltas, Helmuth has more than forty works by contemporary chilean composers in his repertoire.

Born in 1983 in Santiago de Chile, Helmuth Reichel Silva started his musical education at the age of five, attending the Conservatorio Nacional de Música in Santiago, moving later to Germany to continue his studies. An accomplished violinist, he received his Soloist Diploma
from the Hochschule für Musik Würzburg and served as violinist in the Stuttgart Philharmonic and Gelsenkirchen Opera House from 2007 to 2010, before going into conducting with Per Borin at the State University of Music and Performing Arts Stuttgart and Sebastian Tewinkel at the State University of Music Trossingen, where he finished his musical training. Helmuth Reichel Silva enjoys a close relationship to Jonathan Nott and has attended masterclasses by Jorma Panula, Yuji Yuasa, Rodolfo Fischer and Yuuko Amanuma. He was laureate of the Dirigentenpodium Baden-Württemberg Conducting Program, which gives young conductors
the opportunity to work with leading orchestras in Germany.